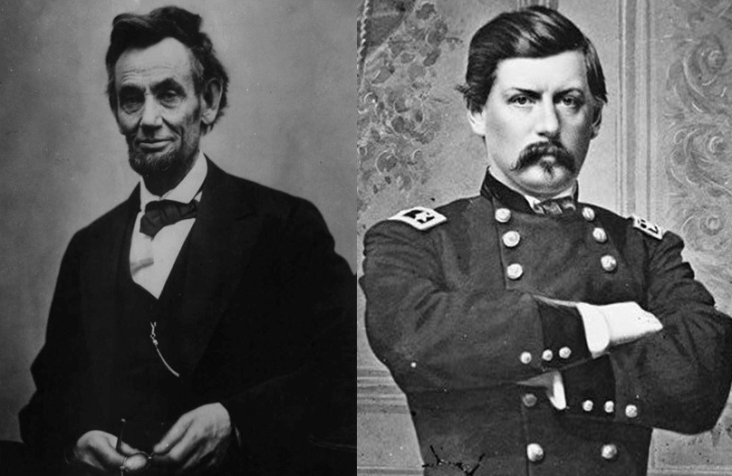 Over the past couple of weeks, I had been involved in several conversations concerning leadership as well as viewing an interesting video in which the CEO of 120VC, Jason Scott, discussed The Hierarchy of Leadership Success. With this in mind and in light of the Fourth of July holiday, I thought it would be interesting to discuss two examples of leadership from American history, Abraham Lincoln, and General George McClellan. Two very different men whose success as leaders varied greatly. Let me explain…

We all know the Stories about Abraham Lincoln. How he built the log cabin in which he was born. A self-educated man who was so honest that he walked miles in the snow to return a few pennies to a customer he had accidentally given the wrong change. While many think of him as the greatest president in the history of the United States, possibly surpassed only by Washington, he had the unlikeliest of profiles. Certainly, he did not have the appearance of a great man. Tall and gangly, he tromped around with an odd walk. His voice was not the rich authoritative voice of Hollywood’s Raymond Massey, but a little higher and shriller than most. He did not come from a wealthy family and lacked any substantive formal education. There are many stories of how during his presidency he personified leadership. There is, however, a lesser known story prior to him becoming a national figure upon which I would like to focus.

As many of you may recall, prior to the ratification of the 17th Amendment in 1913, United States senators were not directly elected by the people but selected by the various state legislatures. In 1855 Lincoln had declared himself a candidate for the Senate. Since he was instrumental in winning a narrow victory for the anti-slavery elements of the Illinois legislature over the Democrats who supported the expansion of slavery, his chances were good. The state legislature had a choice between Lincoln, Stephen Douglas a Democrat, and Lyman Trumbull an anti-slavery Democrat. After several votes, the count stalled at Lincoln – 47, Douglas – 39, and Trumbull – 5. Needing 51 votes to win, Lincoln was just four votes short of victory. Trumbull, however, would not release his votes to Lincoln, although they aligned politically. Lincoln also knew that the Democrats supporting Douglas, if they could not win, would switch to incumbent Senator James Shields whose popularity would enable him to easily defeat Lincoln and the anti-slavery cause. Lincoln focused not on himself, but the cause for which they were fighting. He asked his supporters to change their votes to Trumbull. Trumbull with his five votes ultimately defeat Lincoln with his 47, but for Lincoln, it was important that an anti-slavery senator represented Illinois.

Contrast Lincoln with General George McClellan, who had all the bona fides of a great leader. His father was a prominent surgeon and the founder of Jefferson Medical College. McClellan carried himself with all the gravitas you would expect in a general, with well-coifed dark hair and a thick mustache. Not only did McClellan have the appearance of a great leader, he had a track record of success. After graduating second in his class at West Point, he served with distinction during the Mexican-American War. When McClellan took command, the army was in tatters. As general he used his organizational skills to build the Union army into a formidable fighting force. As he did this the troops he led developed a love for him that many leaders of today could only envy. Yet, some say that he did more harm to the Union than anyone else, including Confederate General Lee.

So, what happened? First, McClellan believed his own press. In other words, the praise of others inflated his estimation of himself. He wrote to his wife that he had become the power of the land. At one point he wrote, “if ‘the people call upon me to save the country – I must save it & cannot respect anything that is in the way.’ McClellan told her that he received ‘letter after letter’ begging him to assume the presidency or become a dictator.”[1] Although he had built a great army he was afraid to use it. At one point, Lincoln frustrated with McClellan’s lack of action, sent him a message “if you are not going to be using the Army might I use it for a while?” McClellan’s self-esteem was so great that he was afraid to lose, afraid to be seen as anything other than the new Caesar, as some were calling him. When called upon to support General Pope in the Second Battle of Bull Run, he disobeyed orders. He feared that when he joined forces with Pope he would lose command, that Pope would be given command of the entire army. McClellan actually hoped for Pope to be defeated in battle. Think of it, a Union General actually hoped for Union loss.

When you consider these two men the difference is obvious. For McClellan, it was all about McClellan. His position was more important than a Union victory on the battlefield, willing for other men to die to preserve his reputation. Ultimately, the feckless general who had all the experience and qualifications even the love of his troops, failed because he was ineffective. Lincoln saw himself as a servant to a greater cause, something much larger than himself. This attitude inspired others, drawing them to his cause. As a result, we remember and love Lincoln as the indispensable man in the preservation of our country.

As John Quincy Adams said, “if your actions inspire others to dream more, learn more, do more, and become more you are a leader”. Be a leader, inspire others, be Lincoln.