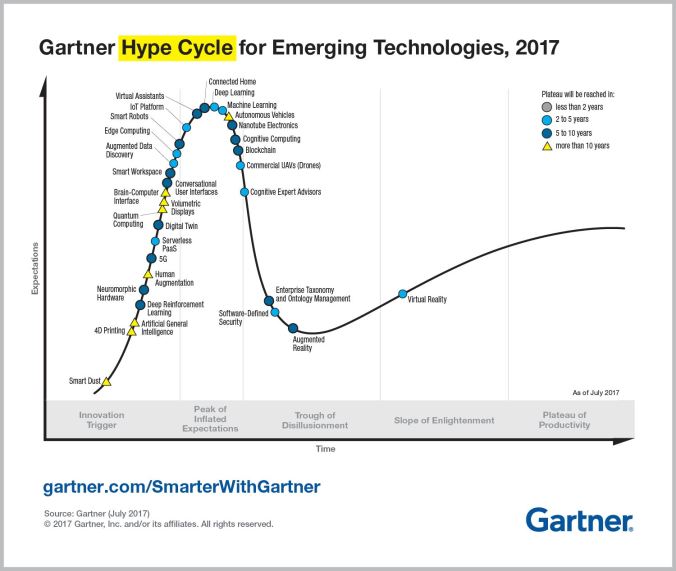 When market analyst and pundits pontificate on the state of a market or new technology they seem to demonstrate a bipolar view of the world. They make pinpoint turns from manic enthusiasm to abject disillusionment. Something that is a panacea for all human ills one week is cast aside the next in favor of the next new hot technology. From what I can see this is about to happen with the Internet of Things (IoT).

In my travels, over the past few weeks, I have had the opportunity to speak with a cross section of people in the high tech industry. After all this talk, I couldn’t help but feel that folks just weren’t quite getting it; they weren’t quite getting IoT. I believe that this is the root cause for a future change in attitudes towards IoT. Let me explain…

Most, if not all transformative technologies go through a period of exaggerated enthusiasm at the start of their life cycle, establishing expectations that few technologies could ever fulfill. In light of this short coming, many lose hope and become disillusioned with the new technology. This cycle of expectation and despair is captured in Gartner’s hype cycle where the hype of new technologies peak, dropping into a trough of despair. Those that arise from this trough climb what Gartner calls the slope of enlightenment to where they level off on the plateau of productivity.

In the above-referenced conversations, the demonstrated lack of a practical vision for IoT as well as a dearth of imagination on the part of many causes me to anticipate that IoT will shortly fall into the trough of disillusionment. This is substantiated by Gartner’s 2017 High Technology Hype Cycle which has placed IoT close to the summit of the IoT curve. I am told that “in the next century, planet earth will don an electric skin. It will use the internet as a scaffold to support and transmit its sensations.” Forgive my cynicism, but why? Why will planet earth don an electric skin? Although we talk about wearables that will interface to smarthomes which will integrate into smart-cities that leverage IoT for traffic, parking, and water control to name but a few, I wonder is that it? Is that enough to spark an IoT enabled world?

In my previous post, Building the IoT, I briefly discussed some of the challenges in creating the infrastructure behind IoT. In reading that article we see that there is a great deal of effort and a large number of resources required to establish a reliable foundation upon which IoT can be built. Where is the profit that will drive entrepreneurs to make these sorts of investments? Certainly not traffic control. When the hoped for IoT revolution does not occur as quickly or in the way in which the enthusiasts envision the hype wave will crest.

This is not to say that I am pessimistic about the future of IoT or that that the world will not be wrapped in an electric skin. Quite the opposite. I don’t believe that the IoT futurists even begin to understand how an IoT enabled world will change our lives. Where I differ is how it will come about. It may be driven by wearables, but it won’t be something that counts my steps or measures my pulse. It may even be driven by smart cities, but it won’t be from water treatment. What is going to drive the wide spread adoption of IoT including the supporting infrastructure is going to be something that captures the people’s imagination.

Think of what has driven our Internet enabled world, it wasn’t all those stodgy business applications. What drove people to the Internet was wanting to not be left out of something exciting. People wanted to join the party on Facebook; arguing politics, sharing vacation photographs, and connecting with old friends. You wanted to stream video. How else were you going to watch House of Cards or whatever people at the office happened to be binge watching? Even the concept of binge watching wasn’t possible without the Net. People were driven to the Internet by the excitement around it. Now, it is integrated into our lives.

For IoT to really fulfill the vision many have, we need this same sense of excitement. I genuinely believe that right now there is some young girl in Ohio or Indiana that is going to grow up to develop an application that will be to IoT what Facebook is to the Internet. There is some kid on the south side of Chicago that is going to look at the world from a slightly different angle that will lead to the IoT revolution. What they will have that many people don’t, including me, is the ability to think past the clichéd visions of IoT to see something totally different from what has been discussed to date. When someone does this, when someone creates an IoT application that will generate excitement, then you are going to see IoT not fulfill the hype, but exceed it.

One thought on “IoT Hype”